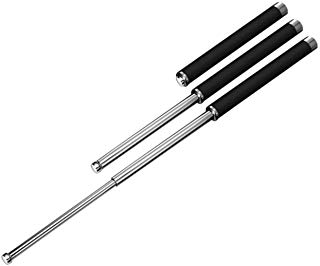 For those of you who do not know an expandable baton is also called a telescopic baton. It is a baton that is able to collapsible on itself and is generally 16 inches long.  It is designed to be securely hidden, and also for a defense against attackers in close range. The baton relies n a blunt force to cause damage to an attackers limbs. The collapsible baton forced downward in a 45 degree angle, by its user, extends to its fullest extent. It can be put back in its original form by tapping the end of the collapsible baton against hard surface. Are expandable batons legal in the United States? Let's see...

Regardless of what state a user is in, even if its legal, it is important to note that a baton must only be used in defense, and generally cannot be used in any manner that would cause death.  Avoiding areas of the neck, head, and private areas are key.

For future reference, most tends tend to categorize what a deadly weapon is. Generally, deadly weapons have some type of restrictions, even guns, despite the second amendment do have certain restrictions. A deadly weapon is one that is designed to kill. While a weapon might be dangerous (i.e. to choke someone, to severely injure) it is not technically deadly.  A baton is dangerous but not deadly.

Overall, to answer the question are expandable batons legal? The answer is yes. As long as you are not in California, Massachusetts, New York, and Washington D.C.

Is Carrying a Baton Legal? The Laws and Regulations in Each State

Knife Laws: Is carrying a knife legal in your state?

Is It Legal To Carry Air Soft Guns

Are Tasers Legal In My State?: Answers about the carry and use of Tasers.

Is It Legal To Use Pepper Spray

5 thoughts on “Are Expandable Batons Legal?”